What happens when you look clearly at a person, understand their thoughts, see past their presentation?

In the series The Devil Inside, Kosala Gunashinghe portrays the good ‘ole saying: Don’t judge a book by its cover.

Stripping his subjects bare (metaphorically of course) from the frills, pomp and glamour (debatable), Kosala focuses on the most basic elements of a person to show you that, there is a lot more to a person than what meets the eye.

Critics may view that this can be measured both ways. Why choose the devilish context to represent?

The common theme in The Devil Inside resides in the world we live in today. Where power and greed has made headlines all over, throughout the last decade. It is interesting that, many people start out with good intentions. Serving the country, doing good, working diligently to earn the wages. And then the tipping point comes where integrity is compromised. Greed attacks, temptation strikes. Indulgence is fulfilled, morale is lost. At the end of day, people are nothing more than the basic elements that formed them – but they have forgotten this. 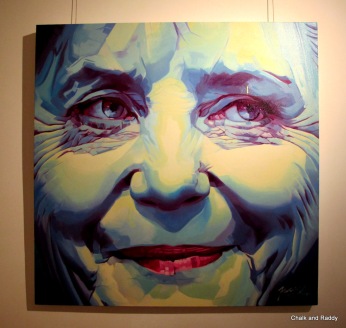 The story in each persona can be debated on. Why is Angela Merkel, Prince Harry and Ai Wei Wei subjected to his “wall of fame”? Ultimately, each subject had/has fallen from their own successes. Kosala’s portrayal would raise questions – why them, and what happened? Has power, fame and recognition gotten the best of them?

Prominent public figures are depicted in a bold representation through Kosala’s confident approach of purely medium to large brush strokes applied in a less delicate but a very surely fashion.

During our meeting with the artist, we asked him about the choice of colours and the style of this work. While we awaited for the great story and meaning, Kosala shared that the style was a self developed one throughout his many years of practice, and the colors were chosen not as a message, but as a preference at the point in time. As consistent as the theme of the series, we realised – read what you think you can of people, but at the end of it all, it is not possible to form perceptions before understanding the reality. To judge and assume a person’s trait, is nothing more than a poorly informed “guestimation” that we are all guilty of.

The Devil Inside reminds us of how we sometimes forget to look past the cover, to think, and not to blindly accept what is presented to us. This mirror that is placed before his subjects draws attention to the “Why”, “When” and “How” of their lives.

Interview and Getting to know Kosala Gunashinghe here.

One thought on “The Devil Inside”

ArtQulture is an online art magazine. We bring you short reviews, opinions and stories about the arts scene. We are also a partner to sembilan art residency program, a platform for emerging artists to grow.

This Creative Magazine by ArtQulture is licensed under a Creative Commons Attribution-NonCommercial-NoDerivs 3.0 Unported License.

Quote of the Day