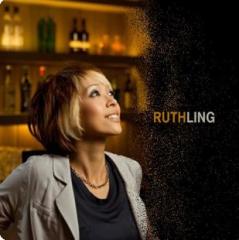 Ruth Ling’s path to success has been colourful to say the least. Her diverse experience, skill and achievements are not only endless, but are still growing. Chatting with Ruth, it is obvious that passion is not the only driver of her success; determination, hard-work, perseverance and the eagerness to learn has propelled her into the ‘wish-list’ of many projects locally and internationally.

When we asked her ‘how did you achieve so much?’ her response was ‘it is true when they say that success equals opportunity plus preparation’. Which is most certainly the reason why Ruth has toured with Amei ( 2011 and 2012) , Stephanie Sun, Sally Yeh; participated in many concerts and showcases, worked with many musicals including Singapore’s wildly popular production “Fried Rice Paradise”, Singapore Repertory Theatre’s Three Little Pigs, upcoming Red Riding Hood, and many many more projects. In addition she has also launched three albums of her own works, and had a solo concert at the Singapore Esplanade as well. Aside from tours, she has somehow even ended up singing on a radio show in Hungary!

Ruth’s first stint after college was as a pianist at the Ritz Carlton lounge many years ago. The pay was not bad at all at SGD100 for a three hour performance, four days a week! But of course that was not her ambition when she pursued a degree in music. Ruth took on jobs for demo music arrangements, starting with very basic charges, while gradually developing more skills and recognition in the music market. She was adventurous in gigs, worked hard to prove her talent and develop her skills. It is an amazing feat to achieve seeing that the local music scene was still underdeveloped.

Singapore’s already successful (yet she claims her achievement so far is only 25% of her hopes and dreams!) musician spends some time with Chalk and Raddy to share her passion with readers here:

So… tell us how your love for music all began?

It’s a bit embarrassing but I’ll admit that my love for music started with English Pop music in the ‘80s/early ‘90s.  We’re talking Rick Astley, Paula Abdul and Milli Vinilli.  I used to listen to their cassette albums for hours on end on my Sony Walkman.  I had some training on classical piano from the age of four, and I was able to hear all the harmonic changes in these songs – little did I know that analyzing these songs became my first unofficial lessons in songwriting and music arrangement.

And how has this changed you?

Most of my teenage life up till my mid 20s was spent being a musical nerd.  I was fascinated by the sound of records and spent about 15 years learning my craft.   I learnt the electone, drums, bass, guitar, saxophone, vocal lessons and finally went to music college.

How about the people around you?

They cut me a lot of slack.  It’s as if being a professional musician, I’m allowed to be a bit more deficient in other areas like cooking, navigating, doing business or having plain common sense.  They are also very supportive of the path I have chosen and this helps to reduce a lot of potential stress.  Of course, this also helps to fill half the seats at my performances.

How do you view the music industry in Singapore, and how does it fare when comparing to the international scene?

I think the music industry in Singapore is still in its infant stage.  Mature music industries would be those in the USA, UK, Australia, Latin America, Japan, Korea and the likes.  I could spend hours dissecting this question, but I’ll just mention 2 points which I think are key in understanding Singapore’s music scene.  They are our market makeup as well as our musician culture.

First, market makeup.  The music industry in Singapore evolves all the time.  From the time of independence in 1965, I can think of 4 “golden periods” that have come and gone.  The first was the rise of English indie bands in the 1970s, such as “Matthew and the Mandarins”.  This was mainly an imitation of what was popular in western civilizations, but written and performed by local musicians.  The second was Mandarin folk songs that were written and performed by then-students such as Eric Moo and Liang Wern Fook, the forefathers of a genre called “Xinyao”.  These songs were uniquely Singaporean in their creation and the music continues to be celebrated today.  The third was the era of Dick Lee’s “Mad Chinaman” and The Kopikat Klan’s “Why you so like dat”.  This was the rise of the blend of East and West, an increasing reflection of Singaporean culture, with more integration of multi-ethnic influences into music arrangements, as well as incorporation of Singlish into lyrics.  The last is our successful foray into the Taiwanese pop market from the mid 90s, namely, our exports Kit Chan, Mavis Hee, Stefanie Sun, JJ Lin and Tanya Chua.  This proved that Singapore had a batch of Chinese pop producers, songwriters, artistes and record companies that had come into their own.

The purpose of this introduction to Singaporean music history is to highlight the diversity in our domestic market.  Without a unique common native tongue, our local artistes who sing in English compete with thousands of artists from the US, Europe, Australia and more.  Those who sing in Mandarin have a better shot competing in Taiwan, as the popular music industry in China had not started until recent years, thus lowering the number of competitors.  The number of people who would buy records of “uniquely Singaporean music” such as “Mad Chinaman” or “Xinyao” is not enough to support the long-term production of that genre.  However, most would agree that the production of such Singaporean music is essential to finding our music identity as a nation.  Thus, arts funding and investment is much needed – and the government has been giving more active support through the National Arts Council and Media Development Authority in the recent years. I believe the targeted push to develop local music will only help to mature the industry in the coming decades.  It will take time.

My other point is about musician culture.  There was a vibrant musician culture in the 70s through 80s, where live music was common in clubs and people came out to enjoy live music performances. This diminished in the 90s with clubs mostly playing pre-recorded music as well as the rise of DJ culture.  Along with the lack of places to perform, the next generation of musicians was also taught to focus on science and math in schools, and I believe there were less young musicians jamming and more of them studying.

With the turn of the century, things picked up for the musician culture, with more arts schools being built and a new crop of young musicians finding new platforms to perform: from live music restaurants su
ch as Timbre to the Esplanade.  When I attended Berklee College of Music in 1999-2002, there was an average of 1 Singaporean student intake per year.  This year, there are 18 Singaporeans in Berklee.  This tells me that we can expect more skilled musicians in years to come, and the music industry will become more vibrant.  We have a long way to go before we have as many clubs, live music venues, successful artists and productions as the US and the UK.

What is your favorite type of work (composing? Arranging? Musicals? Pop ? others…?) and why?

I have done extensive work as an arranger, music director, performer, composer and producer and each role has its own stresses and rewards.  I find that my favourite type of work always involves me having limitless creativity on the product, thus, any of the above roles could potentially offer that.  If I had to choose only one, I think that I naturally lean towards Producing – as I love the journey of taking a song from its initial rough idea to the final polished product.

Which has been your favorite project, and why?

I remember my “Late Nite at the Esplanade” concert fondly.  It was a 75 minute concert of my original songs that was jointly presented by the Esplanade and me.  I invited my favourite musicians to perform with me, and featured some of my producer friends on a few of the songs.  As producer of the show, I planned the entire production from budget to personnel to program flow and arrangements.  It was fun as it was entirely a “Ruth” show and I could do whatever I wanted.

What are your views about Musicians being a career choice in a traditional society (where careers in medicine, financial industry, legal, engineering is still viewed as a career, while musicians and artists are viewed as great past times)

I can see that there are a lot of people working in the arts and arts-related industries, but only a handful make enough money to afford nice cars and houses.  When a young person sets out to make music their career choice, they are often driven by their passion for music, not by promises of fame and fortune.  It is only as they reach their 30s that they may start to realize that they still do not have the financial independence of their peers who have chosen more professional careers.  This may become especially stressful for men who may have dependents.  This should be a consideration, particularly for those musicians who are not willing to partake in commercial music activities such as playing at corporate functions, pubs or to play popular music.  They will find their income streams to be quite limited.

Who would you like to meet the most in the world, and what would you say/ask/do?

I am fascinated with political leaders who advocate non-violence such as Gandhi and Sun Yat Sen, but if I was only limited to one, I would ask Jesus to tell me his entire life story – I would love to hear from His pespective.

What is your advice to budding musicians?

Try different things (within music).  The more you can value add, the more jobs you will get.

What is your advice to music lovers (consumers)?

I wouldn’t dare to give advice to music lovers!  I would only suggest that people tend to forget how drastically their listening environment has deteriorated over the decades.  Listening to a record on a vinyl player versus a car stereo or from a phone speaker…there is really no comparison in the enjoyment of music.

Thank you to Ruth, for the time and thought in sharing your experience and knowledge with us despite your hectic schedule!

For more information about Ruth’s discography, visit her site at http://www.ruthling.net .

*all pictures courtesy of Ruth Ling.

ArtQulture is an online art magazine. We bring you short reviews, opinions and stories about the arts scene. We are also a partner to sembilan art residency program, a platform for emerging artists to grow.

This Creative Magazine by ArtQulture is licensed under a Creative Commons Attribution-NonCommercial-NoDerivs 3.0 Unported License.

Quote of the Day